What’s in a name? If you ask the Keene, N.H. city council, they will tell you that the name “Pho Keene Great,” which is meant to be a play on words, is obscene. The first word in the name, pho, is pronounced “fuh,” as Vietnamese food aficionados can tell you.

According to the Daily Mail:

City Manager Elizabeth Dragon said Pho Keene Great is intended to sound like profanity and that owner Isabelle Jolie didn’t get permission to hang any temporary sign which is required under the conditions of the lease.

‘We really do want them to be successful,’ Dragon said. ‘I’m personally looking forward to frequenting her restaurant, but I do want to have a conversation with her about the sign and make sure that we are all comfortable moving forward.’

Shortly after the restaurant’s management received word of the city council’s concerns, they posted a poll on Twitter asking the public’s reaction to whether the name gave offense. The response was predictably positive. 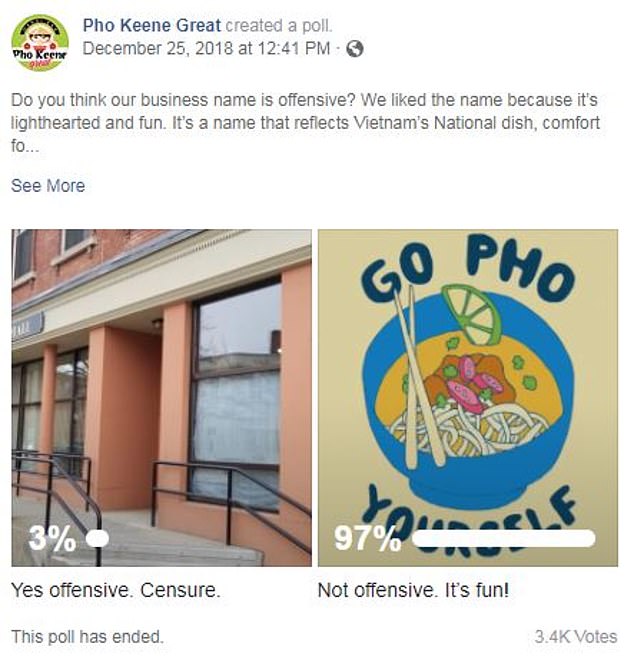 But the city isn’t relenting in their demand that the restaurant’s name be changed.

Which has resulted in a new ploy on Isabelle Jolie’s part. She is now maintaining that the city of Keene is discriminating against the Vietnamese culture. Says Jolie:

It is a wordplay on Vietnamese vernacular and there were not intentions of creating harm or to offend anyone. It was intended to be fun and lighthearted. It is discriminatory to say that a Vietnamese word, a popular food item combined with the name of our city is considered offensive.

Stay tuned to learn whether that argument flies.