This coming Satuday, May 5, is Cinco de Mayo, but it also marks the running of the 144th annual Kentucky Derby. If you don’t plan on being in Louisville for the big race, you can still celebrate the colorful event in style by reserving a spot on the Rooftop of the Refinery Hotel, which is hosting its own Derby party.

Dress to impress as there will be a contest for best-dressed derbyers. Ticket purchasers will also have a chance to win two tickets to next year’s Derby in the flesh. 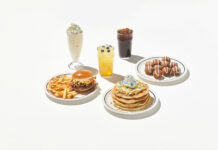