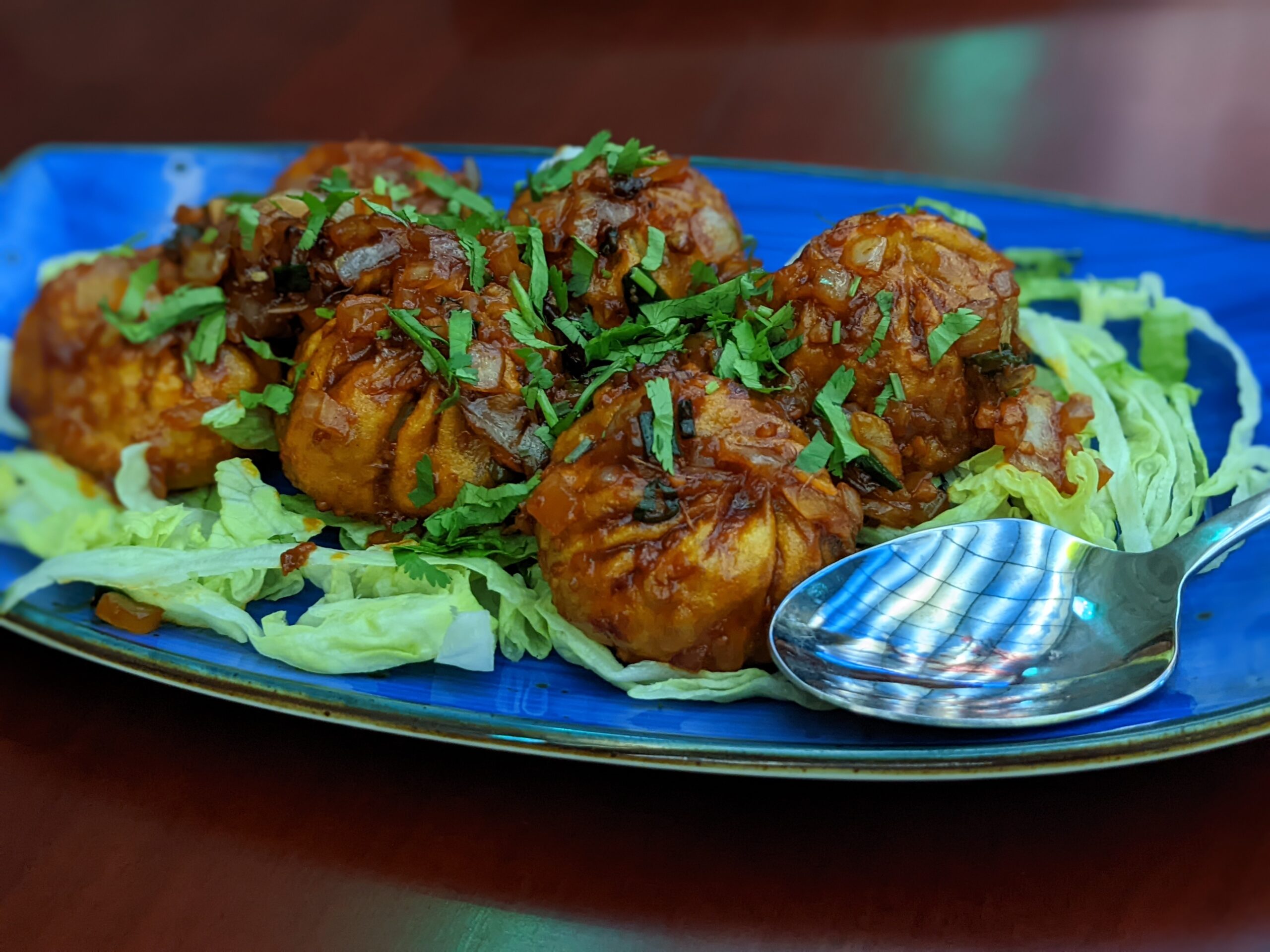 On the menu page of Wok in the Clouds‘s website is an animated GIF of a cartoony wok tossing vegetables. You will find similarly playful design treatments at the websites of Dhaba, Sahib, Chote Nawab, and Malai Marke. What further unites these restaurants is that all are creations of Fine Indian Dining, a hospitality group dedicated to providing an alternative to the spate of New York Indian restaurants where dinner for two can run into the hundreds. At Wok in the Clouds, the highest-priced menu item is $22.99.

The restaurant is laid out in the manner of Indian restaurants on Sixth Street back in the day, which is to say there are two columns of tables. Unlike its forerunners on Sixth Street, the central aisle between the two columns at Wok is wider than the one found on a Greyhound bus. Another difference is the absence of wailing strains of Indian music and of rhinestone depictions of the Taj Mahal and harem scenes against backgrounds of black felt.

The menu, which bills itself as Indian-inspired Asian fusion, reads like the syllabus in a course in “Asian cooking 101.” All the most basic dishes of Indian, Chinese, Thai, Vietnamese, Indonesian, and other Asian cuisines are present.

Some dishes are available in multiple nationalities. The twisted handmade dumplings momo, for example, are offered both in the style of Tibet, where the little bundles of chicken, onion, and ginger are steamed, and of Manchuria, where they are battered, fried, and dunked in a chili-fired spice glaze. Let your server know if you can’t stand the heat, because the kitchen’s tendency if left to its own devices is to run toward the upper regions of the Scoville scale. The crustaceans featured in the garlic fried shrimp are jumbos, tossed with tomatoes, onions, and chopped cilantro. The flavor is spot on, though one wishes the shrimp had been pulled from the wok a little sooner.

Servings here are on the generous side. A whole red snapper blanketed by black bean sauce, for example, fully covers the large-size platter it is served on. The dish easily feeds two. Thick slices of crisp-skinned roast duck can be had in a thick Thai curry basil sauce that is also populated by chunks of pineapple and baby corn.

Perhaps the most surprising part of a meal at Wok is dessert. A couple of Indian staples, such as ras malai and gulab jamun, are offered, but so is a dark, fudgy walnut brownie, served warm with ice cream. If you order the pastry of the day, you receive a block of layer cake the layers of which are mortared with a macerated fruit (usually strawberries) and buttercream frosting. A waitress, who hails from Delhi, assured me that this is the real deal back home.