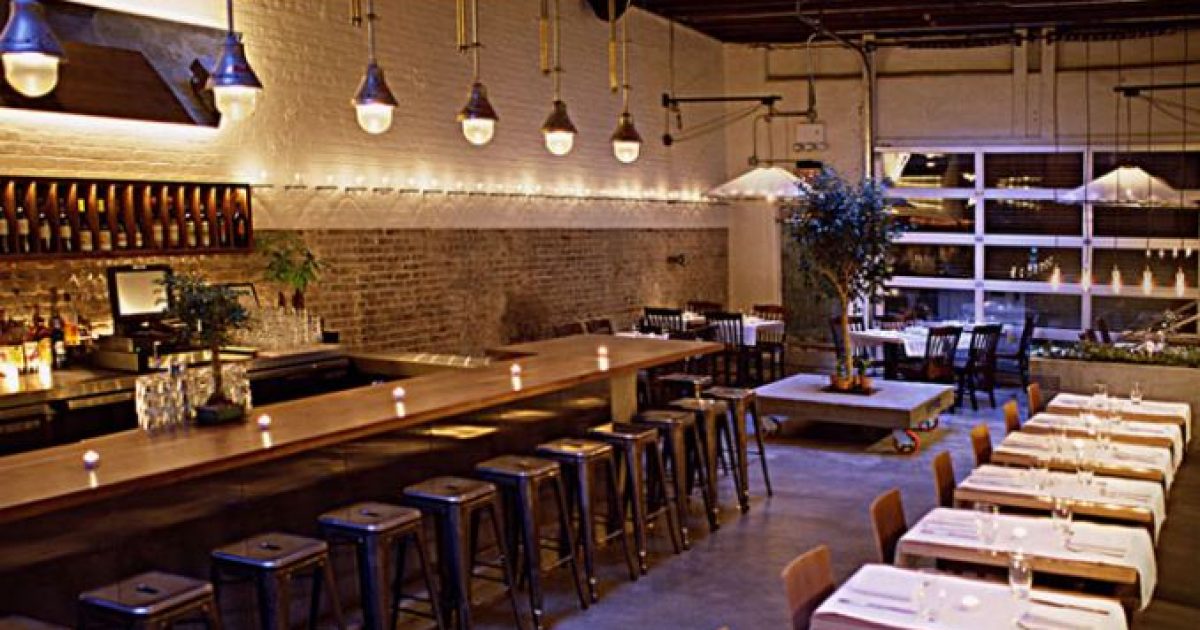 According to his bio, Brad Farmerie “grew up in Pittsburgh in a food-loving family, where his mother exposed him to a variety of cuisines from a young age, always insisting on home baked bread and vegetables straight from the family garden.” I must confess to being a little envious of my fellow Steel City native, having myself come of age in a household where the peas and string beans came from a can and where variety at mealtime was solely a function of the number of starches served (generally north of two). After leaving home, I managed to develop a sense of culinary adventure. And recently Brad Farmerie managed to parlay his own into a Michelin star for Public, the restaurant he now presides over as executive chef.

His creativity is manifest in unexpected ingredients and ingredient pairings (pigs head and foie gras terrine anyone?) and in recipes that in their conception hop-scotch across the globe. Harissa, used to grace a sirloin of lamb, is first whipped into an aïoli. Coconut and Korean pepper are coaxed into spaetzle that serve as a garnish to roast duck breast. Sea trout comes from waters off Tasmania, venison from New Zealand.

The unorthodoxy of what arrives on the plate is matched by the quirkiness of the surroundings, which feature high-tech lighting fixtures, exposed ductwork, and a wall of mullioned windows that looks more at home with light industry than it does the culinary arts. Throughout are touches—old-fashioned post office boxes, wooden card catalogs, shelves of aging books whose Dewey decimal stickers have been amended to read “Public”—that are equally out of sync with a restaurant but perfectly appropriate in a library, school, or other (keyword) public edifice.

Even the menu, affixed to a slender clipboard, has more the look of a shipper’s manifest than it does anything else. Before you turn your attention to that bill of lading, you are brought an amuse, on some evenings a perky salad of watermelon and salty feta drizzled with an exceptionally fruity olive oil and dappled with toasted pumpkin seeds. The micro lemon basil that adorns the dish is procured from a farm that picks its produce only after the order has been placed. The chef is serious about the quality of his raw materials.

Some of the offerings are slightly tongue in cheek. Take mushroom “ceviche,” planks of abalone mushroom in a puddle of ponzu sauce, each plank sporting a dollop of eggplant that has been cooked down to a sweet, concentrated pulpy essence, flavored with miso paste, and topped with a sheaf of fragrant cilantro. White anchovies that have been mildly pickled by their tart marinade arrive on crunchy quinoa croquettes that have dabbed with spicy saffron aïoli.

Some of the dishes defy the rules of food science. It is a well-established fact that you can’t heat oysters, much less fry them, and preserve their raw integrity, yet Brad Farmerie somehow manages the feat with these crisp-crusted Barron Points. The plump bivalves come cradled by a shiso leaf and accompanied by a wasabi-yuzu dipping sauce that adds another dimension to the dish. Crème fraiche swirled into sweet chili sauce provides a foundation for sweet grilled scallops, each garnished by a green plantain crisp.

Public’s beverage list is, like the food menu, global in scope. There are beers you will likely not have encountered previously (did you know that Corsica produces an ale?), though wine, with all its moods and subtleties, is a far better match for food of this complexity. The knowledgeable wine steward recommends an assertive Massaya Blanc from the Bekaa Valley of Lebanon(!) to complement the oysters and scallops, a jammy chilled Teusner “Salsa” Rosé from the Barossa Valley as a partner to pig’s liver crème caramel with roasted grapes and crispy bacon. You spread the simultaneously intense and ethereal paste on crisp toast, an action taken partly to cut the richness, partly to prolong the blissful experience.

Buttery loin of New Zealand venison is the centerpiece of a “sandwich,” in which the part of the bread is played a caramelized dumpling of Cabrales cheese and a bright salsa verde, the part of the lettuce by sautéed spinach, the part of the chips by oyster mushrooms that have been lightly crisped in a pan.

Desserts by Executive Pastry Chef Ellen Mirsky seek to do for the sweet course what Chef Farmerie’s productions do for the savory ones. Among the offerings are chocolate semifreddo with green tea ice cream and orange-poached cherries. Serving semifreddo with ice cream would seem to be a redundancy, but this combination somehow works, in large measure due to the semifreddo’s utterly silky, mellifluous texture. A more exotic ice cream, this one flavored with lemongrass, is teamed with a frankly tart but refreshing rhubarb balsamic cobbler. An excellent rendition of sticky toffee pudding, the English classic, is paired in a novel twist with Armagnac ice cream.

In addition to the main dining room at Public, a second room, the Monday Room, features its own menu (with some overlap) and even its own website—a restaurant within a restaurant.

Those mailboxes you will see are more than just for show. They are part of the restaurant’s “wine mailbox program.” Members pay $50 a month for a private box and key. In exchange for the fee, participants find a new bottle in their box each month valued at $85 to $90—and normally something they wouldn’t be able to find on their own.

Public, 210 Elizabeth Street, bet Prince and Spring Sts, 212-343-7011. Open Monday through Saturday for dinner, weekends for brunch, and Sunday for Sunday Supper. Dinnertime price range: $10.50 to $19 for appetizers, $20 to $28 for main courses, $9 to $16 for desserts. A five-course tasting menus with optional paired wines is also available. Major credit cards are accepted.