While the unprovoked and unjust war rages on in Ukraine, it’s mostly business as usual at New York’s restaurants, though two in particular are feeling the effects — in one case for the better, in the other for the worse.

At the East Village veteran Veselka, lines for a table have sometimes snaked around the block in recent days. As Eater notes, the 68-year-old Ukrainian restaurant has become a rallying point for New Yorkers seeking to express their solidarity with the people of Ukraine amid this time of turmoil and needless loss of lives and treasure. Some are said to be holding signs sharing their support for the beleaguered nation, while others hold aloft Ukrainian flags.

At the even older Russian Tea Room, the scene is the diametric opposite. The restaurant, despite its own condemnation of Russia and overt show of solidarity with Ukraine, was a ghost town during yesterday’s lunch hour. The message below appears both on the restaurant’s website and social media accounts. 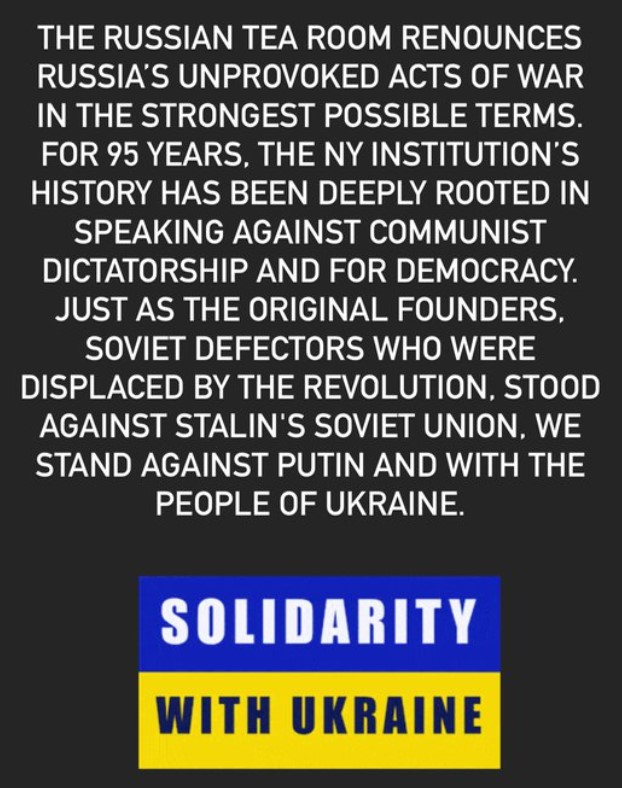 The New York Post reports that the Russian Tea Room staff has received death threats and other forms of harassment.