There are a few desserts that are quintessentially New York. One is the cheesecake recipe first popularized by Lindy’s (aka “New York cheesecake”). Another more obscure meal topper is nesselrode pie, which was revived in October by Petee’s Pie Company.

Yet another is the black and white cookie, which most sources ascribe to Glaser’s Bake Shop, opened in Yorkville in 1902 by Bavarian immigrants. As aficionados of the half-chocolate-iced, half-vanilla-iced cookie can tell you, Glaser’s gave up the ghost in 2018.

But now the cookie they made famous has returned. A branch of the mini-chain Breads Bakery has just opened a block away from where Glaser’s once held court, and they have brought back the black-and-white but in a new and improved form. The recipe replaces the cakelike cookie of the original with laminated dough not unlike the one used in baking croissants, which yields a crispier end result. The role of the white icing in the recast version is played by a vanilla-bean glaze, the black from cocoa powder. As a bonus, the “black” side of the cookie harbors chocolate chips.

Nesselrode Pie Is Alive and Well in New York 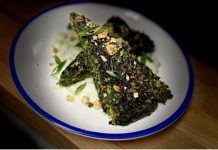