With the pandemic still going strong and showing no signs of letting up, New Yorkers can look forward to another proverbial six weeks of restaurant winter. The options, at least for the foreseeable future, are limited to ordering in directly from a restaurant or relying on a the third-party delivery service.

Be warned, however: Not all third-party delivery services are alike. I learned this the hard way this past Saturday when I placed an order for the first time through Uber Eats.

Generally, I do most of my ordering from Seamless, but Uber Eats has been running a promo offering $30 off your first order. I received three emails to that effect in the space of ten days, so I decided to try it.

But at 8:05, I received a phone call from the driver, Attia, whose English was labored, to put it delicately. He explained as best he could that he couldn’t find my building and asked me to confirm my address, which I did.

Then we had the same conversation a second time.

And then a third time.

All the while, he kept asking me for what sounded like the “method” of my address.

Attia and I concluded our phone conversation at 8:07.

At 8:13, I received an email with this message: 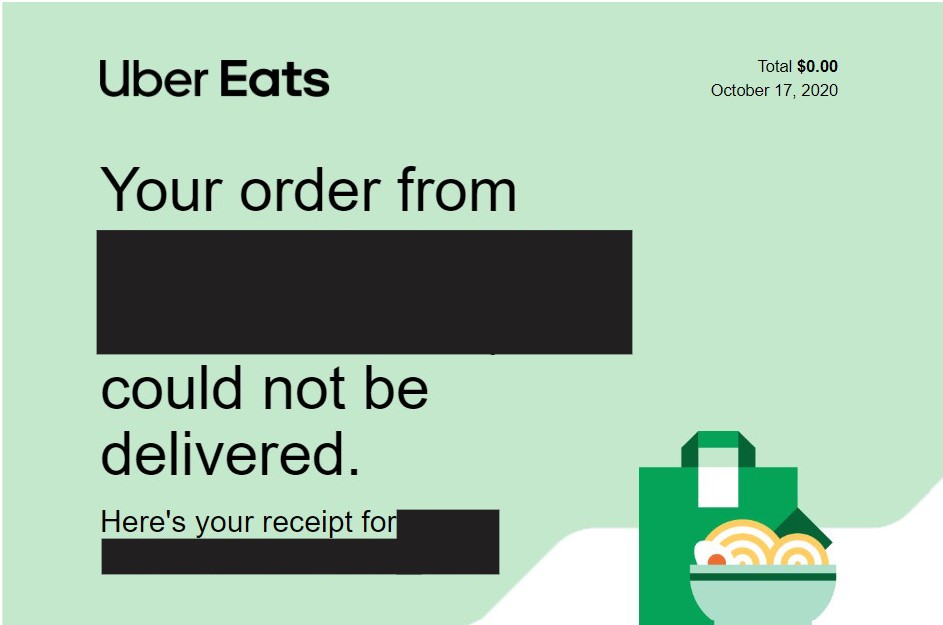 That was all she wrote. There was no appeal to this edict. I tried replying to the email but was informed that that address was solely for outgoing messages. I tried clicking on a “Contact Support” link, hoping to reach a live person, but was redirected instead to a page with a search bar that invites the hungry customer to type in “your issue.” I typed in “My order never arrived” and was taken to another page of boilerplate that noted among other unhelpful things that “if a delivery person made a reasonable effort to contact you when arriving at your requested location, you may not be eligible for a refund.” (I found myself wondering if Attia knew enough English to say the words reasonable effort.)

Next, I tried calling his number, but there was no answer. I found a phone number for Uber Eats customer service and dialed it but was told that no one could answer my call and advised me to try again later. I did, repeatedly, and each time the result was the same.

But I didn’t need to speak to anyone. By now the message was loud and clear. It was in essence this:

We will dispatch one of our crack corps of drivers to deliver food to the address you specify. But if he can’t find your building for whatever reason in 6 minutes, he will give up — and we will support that decision.

As a postscript, I received a second email offering me $10 off each of my next two orders.

From now on, I intend to stick with Seamless.