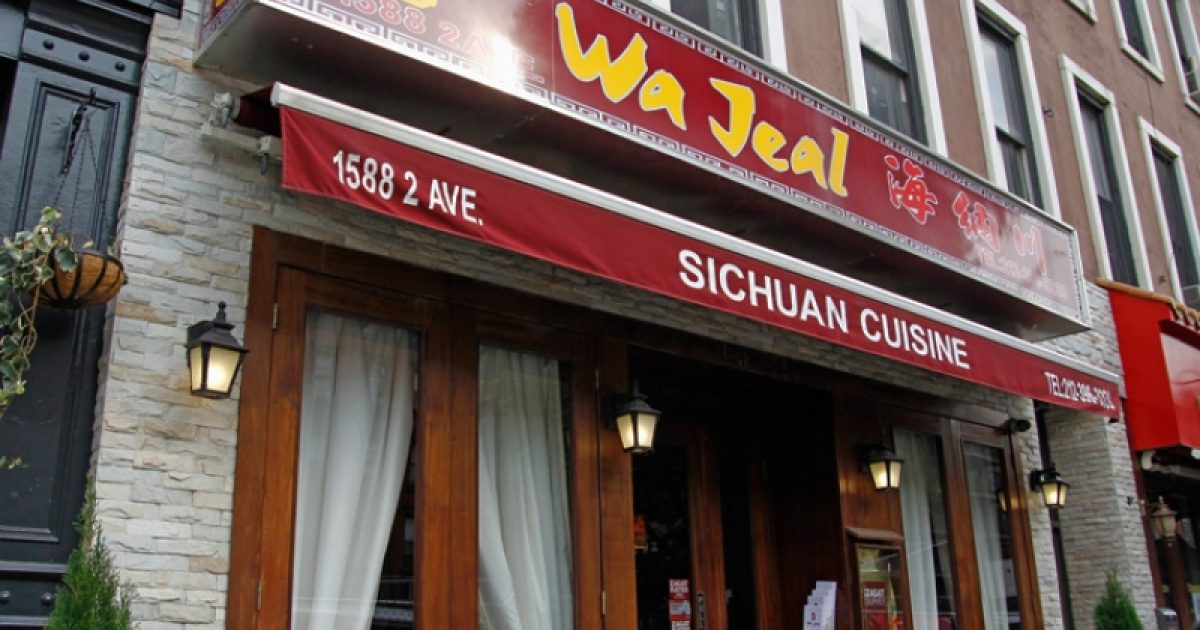 Much has happened since pioneering restaurateur David Keh sparked the “Szechuan revolution” in the late 1970s with the opening of Szechuan Taste on Chatham Square. The enticing boast “First time served in New York”—appended to many dish names on Szechuan Taste’s menu—was ridiculed out of existence after every neighborhood Chinese restaurant in the city began to make the same claim. Another change occurred when the Pinyin orthography, the official system for transcribing Chinese characters into the Roman alphabet, replaced the Wade-Giles system, changing, for example, Peking to Beijing.

The spelling of Szechuan was also updated — to Sichuan, which is how it appears in the name of Wa Jeal Sichuan Chili House. Actually, that name is a redundancy: wa jeal, also transliterated hua jiao, loosely translates to “Sichuan chili.” And while one might justifiably ask what’s in a name, in this case the answer is much. Wa Jeal uses the incendiary chilis in the way most chefs use salt. As a result some of the offerings are spicy enough to fog your eyeballs from the inside.

Blessedly for those who like it hot but not immolated, there are exceptions. One is a room-temperature appetizer of ox tongue and tripe tinctured with a dressing of roasted chilis and peanuts. The tongue, cut into wafer-thin slices, is reminiscent of good flank steak, but the real surprise is the stomach, the strips of which are preternaturally tender.

A signature item among the hot appetizers (hot in both senses) is “dan dan” noodles, an item routinely offered by push cart vendors in Sichuan province. Starchy al dente pasta is tossed with crispy ground pork and scallions, the entirety ankle-deep in smoky chili oil. Up the ladder of heat to Sichuan pork dumplings, slithery little half moons of dough plumped with warming ground pork, redolent of garlic — an infectious dish.

Wok-roasted chili prawns are presented in several guises. In the Sichuan pepper-spiced salt rendition, the prawns arrive curled, perhaps coiling back on themselves in the face of several hundred thousand Scoville units of searing chili blast. Slivers of cucumber cool the dish. Double-cooked streaky pork, another tangy offering, derives its measure of civility from leeks, which are a little more fibrous than you might wish.

One of the sleepers on the menu is an item clearly there as a gesture to those who can’t stand the heat but would rather not exit the kitchen. The dish is wok-seared filet mignon with mushrooms and spinach. While this is not the world’s primest steak and the mushrooms are the button kind, the ingredients are treated with a level of respect rarely seen in a restaurant of modest pretensions. Each morsel of meat is perfectly seared, every mushroom slice accurately browned, the spinach verdant and strong.

Your dishes are cleared and you are brought sections of navel orange and fortune cookies. Some things never change.

Wa Jeal’s location on the Upper East Side has made it a much-prized destination among locals, the attraction owing in large measure to the restaurant’s offering something that most neighborhood haunts don’t. By twenty-first-century New York standards, however, it is off the beaten path. Pick it up brick by brick and move it to Williamsburg or Flushing, and they’d be fighting off the crowds with a stick.