Don’t berate yourself if your knowledge of restaurant-menu Italian leads you to the assumption that a restaurant named Gnocco is a paean to the popular potato dumpling that is a commonplace in New York’s Italian restaurants. To the contrary, the gnocco celebrated at this East Village veteran is a fried pillow of dough consumed with salume as a snack in chef and owner Gian Luca Giovanetti’s native Modena. It is one of a number of novelties that await you when you dine here.

Some time ago I wrote a two-part feature on what I referred to as New York’s “invisible” restaurants — eateries that you access by pressing on the back wall of a phone booth or by knocking on an unmarked door at the end of an alleyway. Gnocco roughly fits this mold. You enter via a pizzeria. Beyond are two dining rooms, the rearmost of which is a glass-enclosed brick patio hung with woven lanterns.

It is here that your culinary journey begins, perhaps with an order of vitello tonnato. This is one of a scant number of dishes among the world’s cuisines that combine meat and fish. You are presented with a platter spread edge-to-edge with a creamy blend of canned tuna, mayo, and lemon, studded with capers, pickles, and cippolini. Secreted beneath are overlapping slices of tender roast veal. A squirt of fresh lemon and you’re off to the races.

The aforementioned gnocco are remarkably airy, light, and greaseless. You make a pocket in each with the back of a spoon and insert strips of savory prosciutto, pleasantly waxy speck, or coppa.

Speck turns up again, this time in a supporting role in the rosetta, lengths of toothsome pasta rolled back on themselves to resemble the petals of a blooming rose, each stuffed with bufala mozzarella and shreds of the air-cured meat. The entire construct arrives ankle-deep in a creamy, truffle-scented sauce and is completed by a couple of crisp-fried basal leaves. 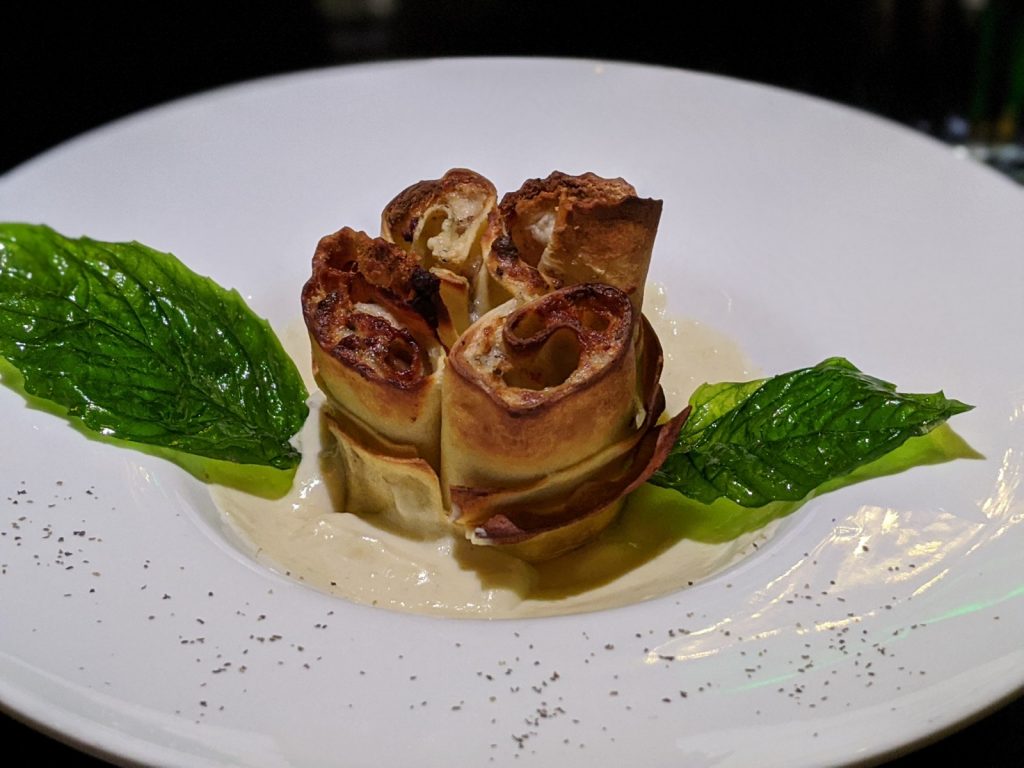 On occasion, the house obtains the briny cured mullet roe known as bottarga, which it grates in copious amounts onto housemade spaghetti that has been run through an extruder creating additional pockets for the sauce. The dish is intensely lemoned, adding another savory dimension.

Cooking in parchment was all the rage in New York’s Italian restaurants a couple of decades back. Gnocco seems bent on reviving that tradition with its branzino al cartoccio, steamed in aluminum foil in the company of shrimp, artichokes, sun-dried tomatoes, potatoes, and grape tomatoes.

There is some debate as to where in Italy maialino al latte originated, with one of the claimants to that distinction being Chef Giovanetti’s native Emiglia-Romania. In any case, the dish, which is rarely seen in these parts, is on the menu at Gnocco, which slow-roasts pork loin in milk seasoned with garlic and rosemary. The meat is served in a reduction of the braising liquid.

An immense crescent of sweet pizza dough filled with warm a blend of the hazelnut chocolate spread and ricotta cheese answers to the name of Nutella calzone. The plentiful dessert arrives under a blizzard of confectioner’s sugar and streaked with chocolate sauce.

Ricotta cheesecake is presented as a tart. The custardy sweet is paired with wild berries and comes under a dollop of whipped cream.

Gnocco has solved the age-old dilemma of restaurant customers straining to read a menu in dimly lit surroundings by encasing its menu in a backlit, scrollable tablet. Here’s hoping other restaurants pick up on the trend.