The year 2017 witnessed the unveiling in New York of what might be called the cross-cultural steakhouse. Among the new restaurants trading on this novelty were Dons Bogam Black, where the steaks speak with a Korean accent, and Tudor City Steakhouse, where your more-or-less traditional steakhouse dinner can commence with sushi.

Last month, another international take on steak was realized in midtown, when a branch of the Turkish steakhouse chain Nusr-et opened its doors.

The restaurant is the thirteenth in chef-owner Nusret Gökçe’s (pronounced “NOOSE-ret guck-CHEH”) worldwide empire. Gökçe rose to fame for his internet videos, which showcase his unorthodox method for salting steaks: He holds a pinch of salt high above his head with his arm bent and allows the white stuff to rain down his bare elbow and (mostly) onto the steak.

On the menu at Nusr-et, you will find an assortment of both familiar — entrecote, filet mignon, New York strip, Kobe — and unfamiliar steak offerings.  A “tomhouse”? Think large ribeye coated in mustard. The grilled Turkish sausage, sucuk, is also available. 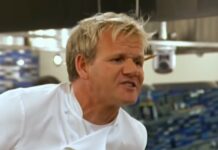 Howard Portnoy - May 21, 2022
Picture it: You're eating an especially messy burrito, taco, or wrap and the filling begins oozing out. If you've found yourself in this predicament and wished someone would invent a magic glue or adhesive tape that would keep the item intact, your wishes have just been answered. It's called "Tastee...