Ever since Douglas Rodriguez’s three New York City restaurants closed around 2000, there have been few additions to the dining scene that lived up to his Nuevo Latino vision. That vision was ably summarized in the New York Times in 2003 as “a cuisine of assembled foods with a lot of different tastes, both raw and cooked” and an “emphasis … on fresh ingredients (lots of produce), contrasting textures and colors, and lively flavors (citrus, chilies, cilantro).”

This is not to say you can’t find the legitimate item if you know where in the city to look. And one place that you might start is Blend on the Water, the second in a mini-empire of three Blend restaurants that have set down roots in Astoria and Long Island City.

What sets Blend on the Water apart from its otherwise identically named siblings is the phrase on the water and the location that that phrase connotes: on the edge of a promontory in the East River. What this means is that the dining room affords a panoramic sweep of the Manhattan skyline. To accentuate the views at night, the lighting is kept low, lending an air of romance to the jewel-like setting that is only slightly undone by the incessant salsa music. 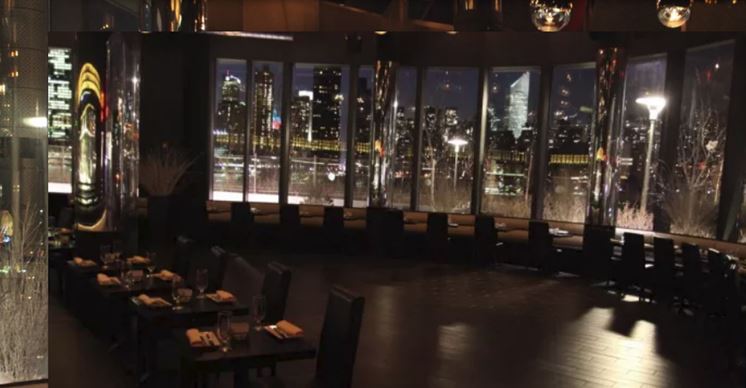 When you have finished drinking in the lights of the city, drink down one of the excellent cocktails served up here. The house does a no-nonsense caipirinha, heavy on the cachaça, the sugar and lime relegated to supporting roles.

You may think that in this semi-darkness you will need to use the flashlight feature on your phone to read the menu, but the management is a step ahead of you. Menus are conveniently backlighted.

Some of the food transcends national boundaries, which is the whole idea — not to mention fun — of Nuevo Latino cooking. Witness mussels knee-deep in a pool of piquant, peppery broth laced with bits of tomato, roasted pepper, and amorphous hunks of crumbled fried chorizo. Slices of garlic toast provide textural contrast.

From Venezuela come tequeños, crispy pastry logs stuffed lobster and crabmeat plus a trio of cheeses from all over the Spanish-speaking word — Manchego, Queso Menonita, and pepperjack: good cocktail food.

A thick cross-sectional slab of salmon is crusted in lime zest and presented in a pineapple reduction, accompanied by cilantro mashed potatoes and asparagus.

Off to Peru for some lomo saltado. The strips of steak are redolent of their ginger marinade, and the role of the traditional sliced onions and tomatoes are played respectively by grilled pearl onions and cherry tomatoes. In place of fries, Blend rounds out the dish with chunks of roasted fingerling potato.

For dessert there is an excellent warm chocolate cake offered up with a scoop of Tahitian vanilla ice cream and dulce de leche. Up a rung on the creativity ladder to piña colada tres leche. The moist lime sponge cake that forms the foundation is threaded with pineapple and coconut, the entirety perfumed with cilantro.

The real sleeper is the coconut flan. Blend offers a clinic in the making of this usually pedestrian sweet. The custard arrives silky and shimmering, dusted with toasted coconut flakes: perfection itself.

You can sample all three desserts, and at a discount, by ordering the dessert platter at $22.

Service is attentive but self-effacing. When you need something, it seems to appear on the table if by magic.

Reaching the restaurant is easiest by car, though street parking is at a premium. Blend also has valet service for $7, though the most entertaining way to reach it is by water taxi from 34th Street, which lets you off practically at the restaurant’s door.

Considering the view and the overall quality of the food, you might expect prices to be far less modest: $6 to $15 for starters, $19 to $30 for main courses, $8 for desserts.